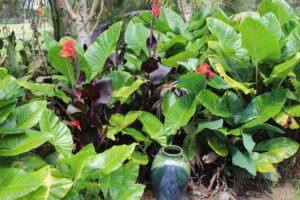 Prior to the middle of 2008, and the initial building of this website, we used to try to stock quite a few ornamentals. The demands of running a large property led me to downsize the range of plants for sale. However, we then realized that we still had some nice plants in the sales area which didn’t fit into our main categories of exotic fruit, palms and hibiscus. Some of these appear below, and I have kept some ornamentals on offer since moving north to near Kerikeri.

The plants are established and clumping I can offer the following,including many cannas, with a variety of colours. (Inquire if you are after particular canna shades, and I may be able to help. If they are flowering, then I can send a photo.)

You should also note that there are non-fruiting bananas with beautiful flowers on plants that do not grow large. These can be found in the bananas section of the fruits for sale in this catalogue.

I do not ordinarily have plants of the ornamentals below for sale, but I can produce plants for special orders. Contact me about this directly. 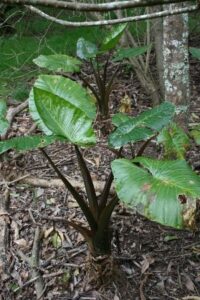 This is just a young plant. For a massed effect see the main foliage in the photo at the head of this section on ornamentals. 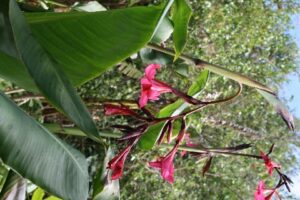 A tall hybrid canna with wonderful carmine-red flowers and good tolerance (for this family) of cool conditions. It’s nearly a true species, and it carries cool tolerance from its higher altitude origins. March 2018 update: I lost this plant after several years at Nestlebrae North. In late 2017 my former partner Rosemary gave me some fresh material to get ‘Ehemanii’ started again. In time I will offer it anew. 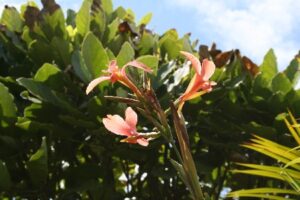 This is a lovely-flowered, vigorous clumper. (The first time we saw it, many years ago, it was being used as an informal hedge at Exotic Nurseries in Kaitaia.) Quite a bit taller flowering than average plant heights for cannas, up to 3m,.

Price: $8 per sucker/$12 per plant, by arrangement

Other cannas: see the section on other canna flowers that I have at the end of this page of ornamentals. Plants or suckers can often be produced from them for you. Contact me for an arrangement. 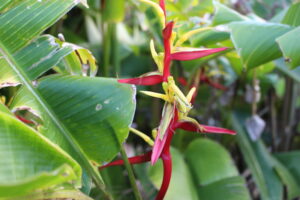 It’s from southern Mexico, and you might suspect it won’t do well here, but in fact it grows quite happily outdoors for me, and for others. Not as vigorous a spreader as H. subulata I have found, though certainly a strong clump is produced. The inflorescence is red, yellow, and a lighter green. The red and yellow might remind you of H. subulata, but the thinner structure of schiedeana is different, and easily distinguished once you have the ability to make a direct comparison. 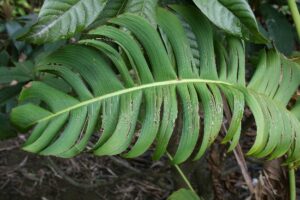 One of the few tropical Heliconia species that are happy outdoors here in a sheltered spot. Pale shades of red, yellow and green make up the flower. The leaves have an unusual, but attractive, “cut” look. A rare plant in NZ. 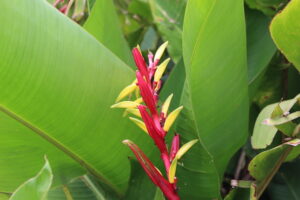 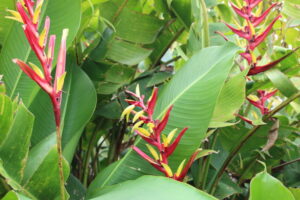 Possibly the hardiest “lobster claw” plant for outdoors NZ. Pretty much foolproof in northern NZ. Protect, fertilize, and water as with dwarf bananas. Has a strong red and yellow flower colour. However, be aware that it is a vigorous spreading plant producing lots of stems once it gets under way, so select a site for it with some thought beforehand.

This one grows satisfactorily outdoors. The late Russell Fransham gave me my original plant, and, I said to him, not long before he died, that it was the best heliconia flower that I’d seen in NZ, and Russell immediately described it in equally positive terms from his point of view. I do note that my plant of H. subulata begins flowering many weeks before this one does. That suggests to me that it’s quite heat-demanding for its planting location in order to do well here. Begins flowering for me in March (i.e. late summer). Or, at least, it did in 2018, but only produced one flower for me in 2019, and that was in May. So, be aware, it is possibly not as adapted to the cold of Aotearoa as I thought at first. And, as of mid March 2020, as I add this sentence, it hasn’t shown any flowers this year either. 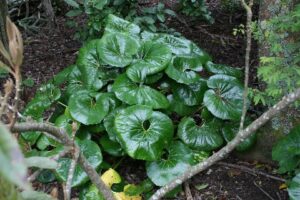 A beautiful understory plant, best in semi-shade and moist, rich soils, although it will tolerate poor soils. 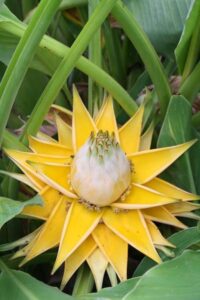 In the family that includes the bananas [Musaceae], and a rare plant not much known to botanists till relatively recently. It grows only to about a maximum of a metre to a metre and a half tall. It’s from up to 2,500 metres above sea level in the mountains of Yunnan, China. It should take several years before it begins flowering. The flower structure can last quite a few weeks on the plant. Although called a “banana” in the popular names, it is not strictly a Musa. It is the only species in the related category of Musella.

Musella is cold hardy (unsurprisingly given its montane origins). Can stand some snow, and frosts. I’m told it has been successfully grown as far South as Invercargill. 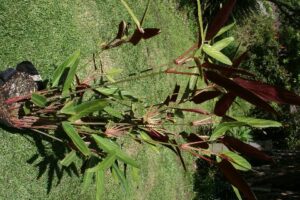 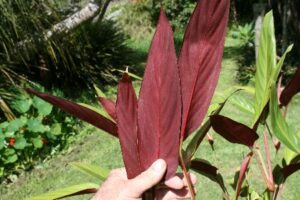 The Maranta family has many members used as warm climate ornamentals for their gorgeously marked leaves. This Stromanthe species has plain leaves but with lovely colour underneath. Will slowly strengthen as a clump to 1m tall. Warm, moist, semi-shade or shade is best. Could be an indoors plant too.