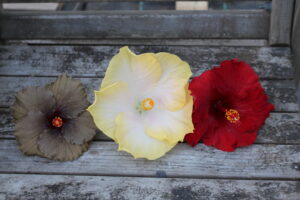 Nestlebrae nursery, owned by John Prince and Rosemary Steele, moved north with John in October 2011. I brought some things with me, such as “Marilyn”, and I continued experimenting with brand new hibiscus plants I’d raised from seed. My idea was to bring some small plants of some of my favourites (not just hibiscus) from South Kaipara Head with me, and to then concentrate on multiple plantings of relatively fewer species in a slightly warmer climate. Rosemary retired to a new house and a cooler location on a farm near one of her brothers much further south. But first a little history and explanation.

Exotic fruiting plants
Northwest of Auckland, in the countryside near Helensville, Nestlebrae Exotics was run by John Prince and Rosemary Steele, and it was the New Zealand specialist in warm climate fruits, particularly the more unusual and exotic species and varieties. Our knowledge, range, and contacts in this area were unrivalled. However, Nestlebrae had to be downsized, and John moved to a much smaller property near Kerikeri.

Hibiscus
I also had a developing interest in hibiscus, a type of plant for the warmer regions of New Zealand. The more I dealt with hibiscus, the more I thought that the plant trade had generally been slow to present many really modern trends alongside the older varieties. There are a few fairly modern hybrids available commercially now, but that could be expanded. This became my main focus, and I hoped to spend the next few years building up a stock of hibiscus, old and new, for sale. The time of another release of some of these is coming closer!

The flower below was my first new one in the Far North. I’m calling it ‘John Prince’. And lots of other Nestlebrae flowers exist now too. 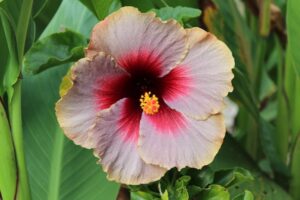 Palms
At Nestlebrae near Helensville we sold palms, and did offer some less common species for collectors. My practical interest in planting palms continued in my new location near Kerikeri. But, from the end of 2011, Nestlebrae ceased to sell them. By the end of 2021, however, I was edging towards offering Date Palms (Phoenix dactylifera) for sale. They fit to a limited degree with the fruit tree selling speciality of this site. They provide an important fruit in international commerce, after all. They grow well in northern Aotearoa, even if we lack the heat to mature any fruit that set.

Advice is free
on the limited range of plants that Nestlebrae Exotics now offers.
For information on products and sales, click on “Products” above and then go to “General Information”.
Further, click on any smaller picture and it should isolate it and increase the size of the image for better viewing.

More than five years after I arrived to live near Kerikeri Marilyn (definitely needing a new paint job) was still showing her legs, and more, off to me and my visitors. Some plants have been and gone from the plantings near her, but Marilyn still signals to us from ‘The Seven Year Itch’ in her famous pose that ostensibly was about cooling off in very hot New York weather with the ventilator blast from a subway line. And some of the plants with a particularly close view, still blush on a regular basis. 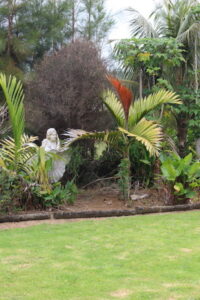 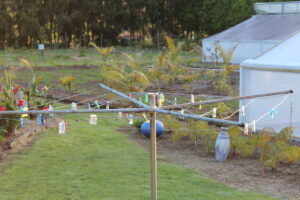 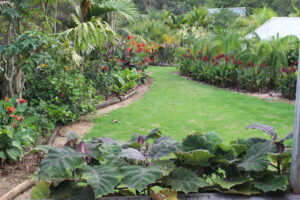