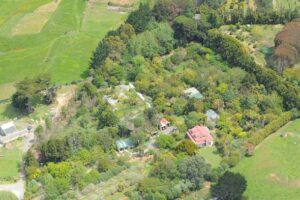 Nestlebrae: a little history about the name

New Zealand born James McDonald settled in Helensville in the 19th Century and worked at McLeod’s Mill in Helensville. He later drove a bullock wagon for McLeod’s store, and it was he who selected the kauri timber for the Anglican church which opened in Helensville in 1879. He bought 140 acres at Parkhurst, about seven kilometres from town, on the South Kaipara Head peninsula. The original dwelling was replaced in 1898, after a fire, by a new house which they called Nestlebrae. 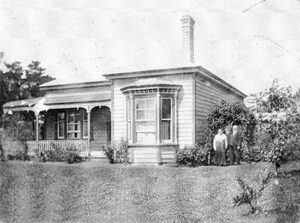 Here is James with his wife, probably in 1917, with the new date palm (Phoenix dactylifera), in the right foreground. It’s about three years old, and must have been grown from seed in 1914 before the war stopped the trading of ‘non-essentials’ such as fresh dates.

McDonald’s son George continued farming there, mostly with sheep and beef cattle, till he died in 1971. 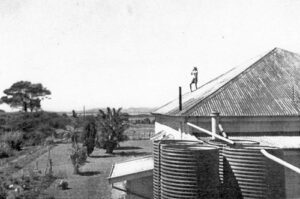 In 1946, by standing on the roof you could see the Kaipara Harbour, and in the centre left that date palm (now 32 years old) has grown well.

By the mid-1980s it was in other hands, and run down. Troy Corporation, which crashed in 1987 along with the stock market, subdivided it into lifestyle blocks. We bought the one with the farmhouse on it, along with 15 acres, in that same year, intending to have fun with plants, and eventually we hoped to earn money from some of the more successful subtropicals. 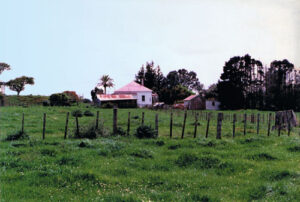 This was taken on the day we viewed the house for the first time with the real estate agent in October 1987. The date palm is now significantly taller than the house. 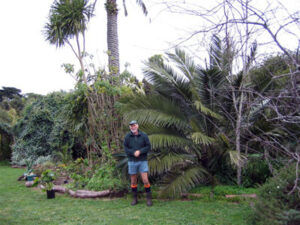 The trunk of that date palm towered above John on the coldest day of July 2005 as he posed and froze before a Chilean Wine Palm. 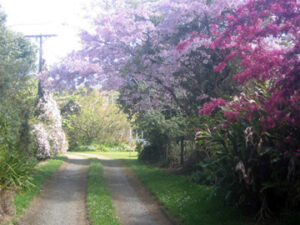 We came to this property just before Christmas 1987. It was the fact of warm soils, and being north of Auckland, which attracted John particularly. However, frost levels were more than anticipated, so in frosty winters there could be quite a bit of visual damage to the more susceptible plants. Banana leaves would be an obvious example. Some winters were essentially frost free. Further, once many trees and shrubs have grown, there is a protective canopy of leaves to hold in warmth, and susceptible plants that might die in the open can then do rather better.

And the soils were indeed warm. John attended a night course about 1983 at which the man who was then the chief Ministry adviser in Auckland gave a two hour lecture on soils. Red Hill Sandy Loams, which begin at about the Muriwai Road, northwest of Auckland, and continue northwards, were particularly warm. We came to South Kaipara Head, to the Nestlebrae South property, with his suggestion that “grass growth starts on these soils about three weeks before Auckland [generally]” ringing in John’s ears. It was nearly all open grassland, with a few trees inherited from the farming years. It was time to begin experimenting on our 6.16ha (or 15 acres in oldspeak). 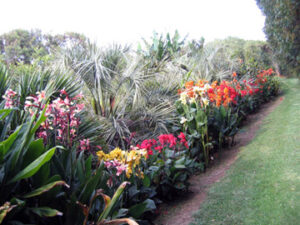 However, it is always well to remember that no parts of New Zealand (except some islands further north in the Pacific Ocean) are subtropical. We are, more accurately, warm temperate, with a maritime or oceanic climate. We have real winters, and temperatures climb very slowly during our rather cool and always moist springs. Lots of subtropical and tropical plants prefer dry winters and wet summers. If anything, we are the reverse of that. The setting of the islands in a huge ocean also means that warming is slow, held back by the enormous amounts of cool water all around. Temperatures in spring rise much faster in Northern New South Wales, for example.
Despite the handicaps imposed by our situation, many cool tolerant subtropicals grew well, even if it was more slowly than in “better” climates. Rosemary, with her collection of 155 traditional “heritage” roses, and many cottage garden companion plants, conversely found that the warm parts of the year were not ideal for her style of gardening. Nestlebrae became a very large collection of plants, many very unusual collectors’ items amongst them. We had, for example, about 60 different Musa (bananas), 170 palm species or varieties, over 20 sorts of casimiroas, at one stage nearly 30 different passionfruits, over 40 varieties of apple, and on, and on.

Nestlebrae Exotics moved and evolved
This unique warm climate garden, home, and business was located on South Kaipara Head
After 24 years of plant collecting and seed importing we reached a time in our lives when we had to consider how long we could keep a big property going. We didn’t want to give up the lifestyle, the plants, and even more new opportunities and developments there. But it was time to think of handing on to people with fresh energies. We could not find a buyer for the business, unfortunately.

You can visit all around this website now and most of a sense of what Nestlebrae Exotics was all about by late 2011 has gone. From the home page you can access some information, much of it illustrated, and sometimes with thumbnail pictures you can click on to get bigger images.

We sold our South Kaipara Head property where Nestlebrae was for many years in 2011, and in October 2011 John relocated to a much smaller site near Kerikeri. His intention was to sell a strictly limited range of plants. There would be no palms for sale, perhaps a few ornamentals, definitely some of his best warm climate edibles, but mostly there would be hibiscus, many of them his own selections.

As the great American plant explorer David Fairchild used to write, and say- “Press On!”

Or email Nestlebrae by clicking here