New fruit appearing on our property, or even in New Zealand, for the first time are a much more irregular and infrequent occurrence than, for example, our new hibiscus flowers. Nevertheless, in 2008 we had at least four young fruit trees set something for the first time. Provided first fruit are held by the trees, and are able to grow to maturity, I will show their continuing development by updating their photographs occasionally. 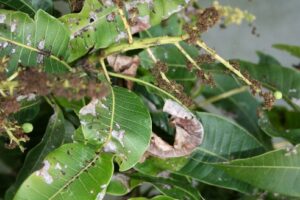 Mango trees will grow very slowly in the warmer parts of northern NZ. Most won’t set fruit reliably, or ever, outdoors. Moisture in the flowers inevitably brings on diseases such as botrytis. Even heavy dew will do it. Mango trees are largely adapted to produce flowers during dry spells, or go on flowering in some selections until they run into a dry spell, and plant chemicals then signal that fruit has set. In NZ, in late spring and early summer, there is just about always enough moisture around to spoil the flowers of an unprotected tree. The only reliable way to fruit a mango is under cover. Chances are the results will be good to excellent eating. I have several small mango trees outdoors. One has been flowering since about 2004. I’ve tried various sprays on the flowers following advice from overseas, or from a label usage on something bought for other purposes (e.g. Stroby from BASF). None have given me success. In late 2007 I built a structure around the flowering one, with heavy duty frost cloth on three sides to enhance the warmth a bit. The roof didn’t slope enough. I found this out by putting plastic on the roof. The first rain on the plastic produced a dangerous sagging pond over my little mango! For December 2008 I rebuilt the roof. In early January 2009 it seemed to be helping. But, I’m making no great claims yet. The atemoya and green sapote experiences recorded in this section are sufficient warnings about getting too optimistic yet. 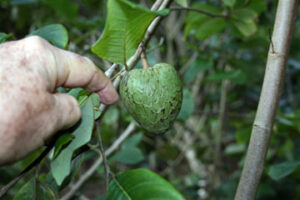 These are hybrids between sugar apples (which really demand more warmth than we can generally give them) and cherimoyas (which can do well here in the right spots). That is, they are a cross between Annona squamosa and Annona cherimola. Commercially, atemoyas are quite widely grown in northern coastal New South Wales and in southern Queensland. If you see ‘custard apples’ for sale in Sydney, then you are probably looking at atemoyas. Sugar apples are a challenge outdoors in the warmest spots in Northland, although Dave Austen has been successful with them near Kaitaia. Atemoyas, as you might expect, are intermediate between their parents in their heat requirements and their tolerance of cold. Hence some experimenters have thought that they are worth trying in NZ. 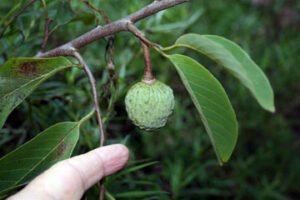 The first two Kiwis I ever spoke to about their experiences with them told me that the trees grew, and even flowered, but didn’t fruit successfully for them. One was in the Bay of Islands and the other lived in Tauranga. Much more recently two different people, in Whangarei and Kaitaia, told me that they had been successful, and that meant my fears about their impossibility were misplaced.

In 2008 two of our young atemoyas, growing in different parts of Nestlebrae, set a single fruit each. A month or so later I noticed that development of a third type had begun. I had in our sales area a line of half a dozen little grafted atemoyas. One of them had set a fruit! A week or so later I took that one out of the sales area and planted it next to one of those fruiting atemoyas that were already in the ground. Here are pictures of two of them taken in early July 2008 when the fruit had already been growing for some months.

One of the first three atemoyas aborted in early spring. Another grew to small to medium cherimoya size. It must have tasted OK since when I went to check on it some grateful bird had left only half the skin and some seeds! The one in the bottom picture hung in there, too small to attract a bird, and obscured by foliage of other plants, but it too came to nothing.

The summer of 2010-11 was warm and often dry. There was better than usual fruit set or flowering on a number of plants that are sometimes difficult. One atemoya produced a real crop with a number of fruit, and another had a few fruit for the first time. Here are photos from April 2011. 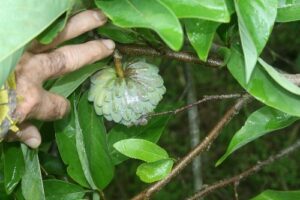 There are at least four fruit visible in the original shot under part of the tree’s canopy to the right. Another thing to note is the distinctly non-cherimoya form of the sharply bumped other little atemoya to the left. They all still had lots of growing to do at the time of these photos. 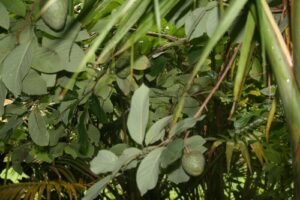 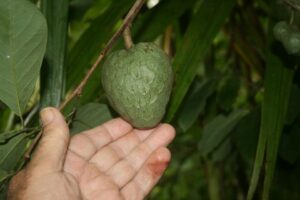 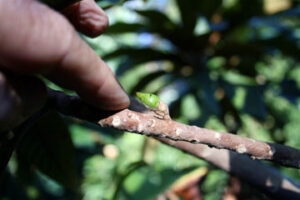 The Sapotaceae are a genus with many edible fruits, some of them rather well regarded. Green Sapotes (Pouteria viridis) come from central America. Some populations occur at elevation, even well above 2,000m high. Those ones would be particularly interesting for experimentation here since temperatures decline steadily with greater altitude. Green Sapotes are locally marketed in parts of such countries as Guatemala and Costa Rica. Reports from modern growers and collectors outside the home areas of the species report that good ones can be very acceptable, though there is a lot of variation in quality. As it happens, I had learned that my initial trees came from seeds from some Australian trees. These in turn had been seedlings from trees in Florida. Taking that line of development back yet another step, my reading had indicated that the initial imports of seeds into Florida were deliberately obtained from Green Sapotes growing near or at the highest locations of the species in habitat.This was really gratifying to me, when I worked it out from various written sources that I subscribed to in the 1990s.

Everything that I have seen about this species growing at Nestlebrae has so far confirmed that they have potential here. The leaves are tough (and attractive). It’s a handsome tree. People on tours here often ask “what sort of tree is that?” A number have guessed it might be a loquat, to which it bears a moderate resemblance. The only frost damage so far has been on a couple of our colder mornings, and then only on very small plants. They grow steadily, look good, and even consistently flush new leaves throughout winter. I became pretty sure some time ago that they could succeed in the milder spots of northern NZ.

However, I’d also had reports from California that they have gathered a reputation there of flowering without setting fruits. My oldest tree, at about 2m tall, began flowering in 2006, and repeated in 2007, both times without successful pollination. This year, to my delight, one of the flowers had turned into a tiny fruitlet. When it was clearly stable, and not about to drop off, I took a photo in May 2008.

The fruits take a long, long time to develop and mature. I remain optimistic, but I also know that there is far to go before we have something to eat, and many nasty things could happen to this first fruiting in the meantime. 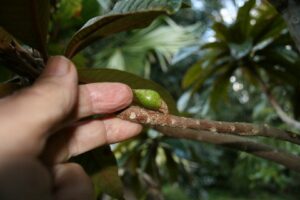 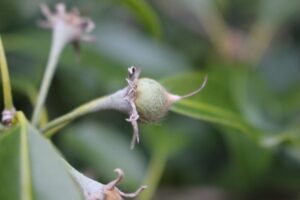 In 2015 one of my two Peanut Butter Fruit flowered for the first time, but did not hold any fruit to maturity. In 2016 both shrubs flowered, and quite a few fruit clusters formed, more so on the tree that was in its second flowering season. Here are some of the fruit in Winter/August 2016. (click on the thumbnails) 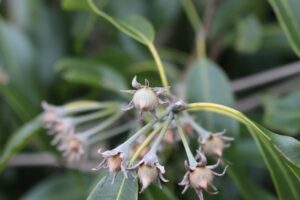 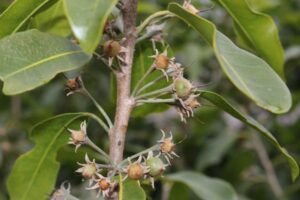 The Peanut Butter Fruit (Bunchosia armeniaca) are quite edible. Mildly sweet, with an inner consistency of smooth peanut butter, and a similar colour for the flesh. Inevitably, when I’m showing people around, the first question is “and do they taste like it?”  When I ate them on a special afternoon in a specialist fruit orchard on Oahu in Hawaii in 2000 I was probably a bit hyper, and I’d have said “yes”. But the answer for my own fruit, now the two plants that I have are flowering at nearly 2m tall, would be that I can’t detect any distinctive flavouring. Perhaps it’s a climate thing, with more taste in warmer climates. I also haven’t found viable seeds in the fruit yet. I have had several fruit which were as big as they get for me (marble size) which had larger seeds than most of what I’ve seen so far. I’d guess that better pollination will help as the two shrub sized specimens, currently about 2m high, grow into each other.

In May of 2017 I paid a visit to South Kaipara Head courtesy of the current owners of our former property. To my delight a number of the plants that I put in ground many years ago had fruited for the first time.