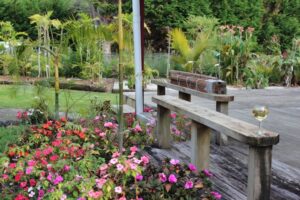 The period from when I arrived in October 2011 through to the end of 2012 was one of slow development and change. Hundreds of the plants that I brought with me went into the ground, and one day I hoped to walk around under and amidst them in a way not possible immediately. I could tell people that “now I look at my orchard trees down there at knee height, rather than looking up into them”. That’s something of an exaggeration, but after the South Head property it really was a project about starting over- but this time founded on the knowledge and plants I’d brought from down south.

It has taken until now, as I write this during the Christmas-New Year 2021 period as part of a major revision of my website, to be able to say that this year is the first time since 2011 that I have repeatedly been recognizing, and saying, that I am now often looking into the planted areas, and not down on them.

At Waipapa near Kerikeri I am on volcanic soil. This is usually regarded as a desirable thing, and it was something that I sought out when looking to move. In my case, it is certainly free draining, and better than heavy clays, but it also has quite a lot of volcanic stone in it, and is harder to work with than the sandy loams of South Kaipara Head that I moved from. And that’s not to mention the tree roots that extend into this small property (two thirds of a hectare), often from big wind shelter trees between me and the neighbours. Overall, though, it’s OK for growing plants. And I can tell myself that nothing has blown up for many hundreds of years, and I can be relaxed about living in part of a volcanic field with something like 27 major vents and craters in the ground or on top of hills. The field extends from near the Kerikeri coastal area well inland many kilometres to Kaikohe and its nearby towns which sit amidst quite a few extinct small volcanoes.

A Sales Area:
The main things that lured me to Ness Road was that it was on volcanic soil and that it was in the area served by the Kerikeri horticultural irrigation scheme. There were also two old plastic houses that had been used for purposes such as orchid growing and tomatoes in the past, amongst other things. They were much more decrepit than I realized when I bought the place. 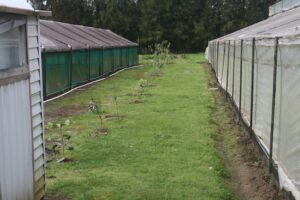 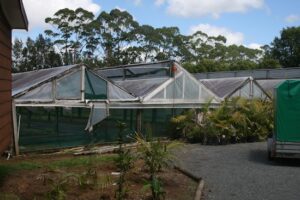 A local contractor has worked on them from time to time, but only very intermittently. The plastic house that was lower in height was brought down to just over a third of its original length, and it was reskinned with white shade cloth. I then added weedmat throughout, and began to slowly move in plants for sale. Presto, a sales area. The final shot is at New Year 2013. 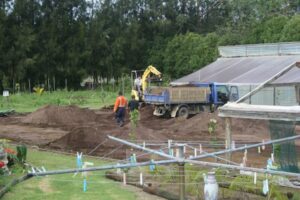 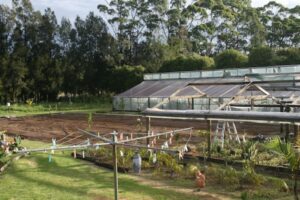 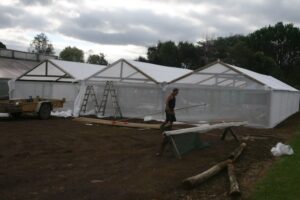 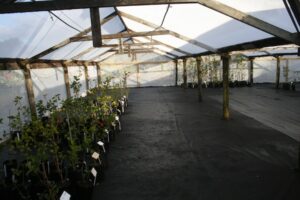 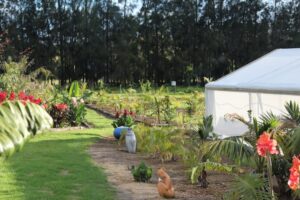 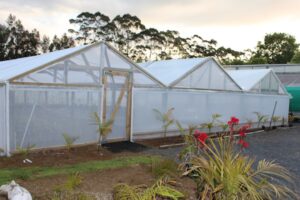 A Propagating and Growing House:
Some of the refurbishing has still to be done. Frustrating! But there have been plenty of improvements too. The idea was to grow in ground, in root control bags, some plants which I’ve proved to myself are in a constant struggle outdoors in northern NZ. The plastic over them gives the boost that they need to grow and fruit- I hoped! Apart from that, an area at one end has been weedmatted and retained for propagating young plants. 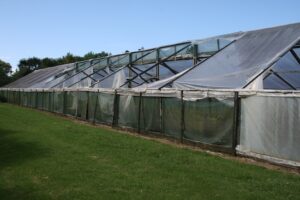 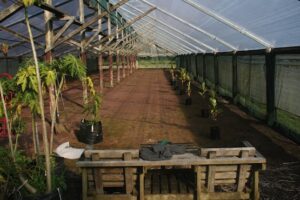 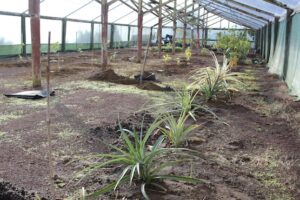 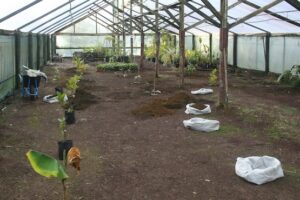 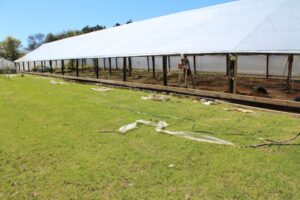 Summer 2013 till Winter 2014
There was a long dry spell in Spring (October-November 2013), but then there were adequate rains after that. Still, it would be better to extend the irrigation into the outdoors gardens, I was realizing.

By May 2014 I was getting the best flowering so far on the new hibiscus. Instead of occasional flowers appearing, there was now enough bushing up of plants occurring to get some multiple displays before Winter. Below is the very front of the property- and it didn’t look like this a couple of years earlier. 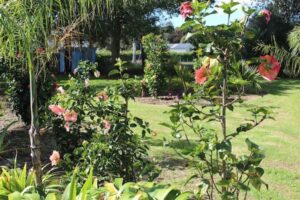 Winter 2014- a huge challenge
Early in July 2014 the Far North was hit by a massive storm. It rained nonstop for four and a half days. A total of 391mm of rain (about fifteen and a half inches) fell during that time. The wind flung very boisterous bursts. Amongst the first heavy gusts I heard the roof of my inherited plastic house give way. All the hibiscus being overwintered, some small palms, and some of the warm climate fruit plants sat for weeks, completely unprotected from the weather. There are two people who specialize in working on such structures that I could find in the whole of Northland. Neither would return my later calls as to whether they could help. My thoughts towards them embodied “disappointment”. Long sleepless periods followed as I contemplated this disaster. 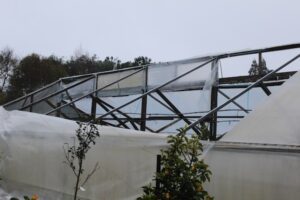 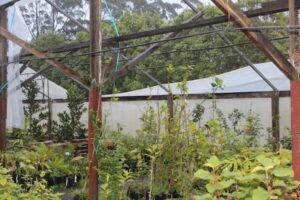 Then, wonderfully, and surprisingly, I found Bob the Builder, living in Kerikeri, and willing to have a go at pretty much anything. Moreover, he’d had personal experience already with plastic houses and similar structures on a big scale.

By late August the plants were once again protected, and warmer. Worth celebrating! 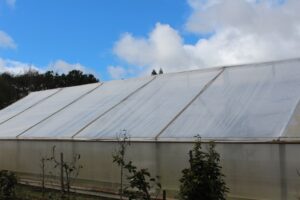 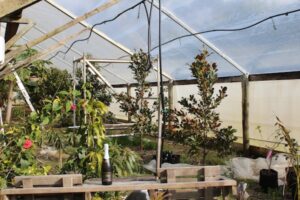 April 2018. That initial shot at the start of this page above, with wine glass, is more or less this view now. And the wine has been largely put aside- I’ve gone off it, but haven’t gone off these plants! 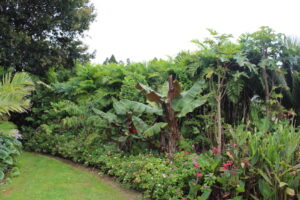 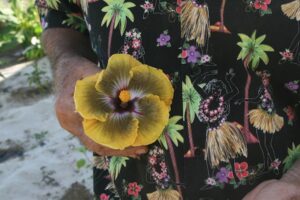