A number of plants that resulted from my earlier work with raising new seedlings came north with me to the new property in late 2011. Many of these were planted out in what passed for “summer” 2011-2012, to be observed with a particular eye for floriferous examples which also come through the rigors of winter well and which are inherently attractive and/or interesting.

For a taste of pre-2012 seedlings, click on “New Flowers and Fruit” in the line near the top of each page, and select “New Hibiscus- The Beginnings”

They have been bred under permanently warm conditions, and, in hibiscus terms, even in the Far North of New Zealand, we are definitely not in that sort of a climate. Before I can offer them for sale they have to prove themselves as capable of surviving adequately on their own roots, unprotected, and outdoors. I hope to begin grafting some of these to hardier rootstocks after Winter 2012 has ended, with an expectation of offering some of them for sale. In the meantime, new seedlings from fresh importations have joined the older ones.

Now it is time to move on and see some of the new seedlings that emerged after my move in late 2011. 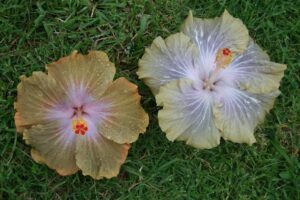 On the left is ‘Janet Milne’, named after a local friend of Rosemary at South Kaipara Head, a plant lover generally, and a lover of home grown bananas specifically!

On the right is an excellent example of how, with new flowers, the totally unexpected will arrive, to one’s immediate delight. Yes, it really does show those colours from pale lavender thru to a definite green edging. It’s ‘Green With Envy’! And I had no idea at all that it was going to open the first time, let alone in such a wonderful set of colours. 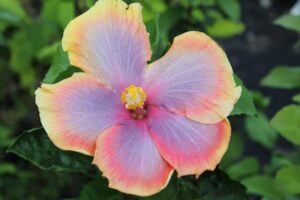 I’m being selective here, but one of the great successes for me in early 2013 has been this flower. I can’t wait to see how it does when I get the plant up to a bigger size, and trial it in ground! Will it display well? Will it have lots of flowers? I certainly hope so. 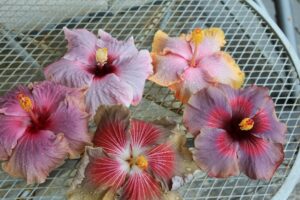 Here’s a cluster of flowers, seedlings that I brought north with me, and planted in early 2012 mostly. This cluster of flowers was photographed in Summer 2013. Not your typical collection of hibiscus as we’ve known them in Aotearoa!

Some more wonderful new flowers impressed me once again during this period. 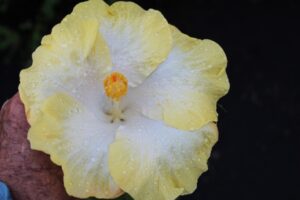 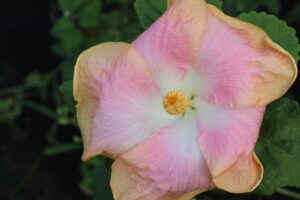 There was ‘Brie’, a nicely attractive and restrained yellow and white flower which demonstrated once again that flowers without the full complexity and possibilities shown by many modern hibiscus can hold their own in such company. Brie and Daniel were visiting, and this particularly took her eye. OK, I said, we’ll call it after you. Then something wonderful happened. More observation showed that it begins with quite different pastel looks on its first day, as in the 2nd thumbnail. Chemical alchemy within hibiscus! 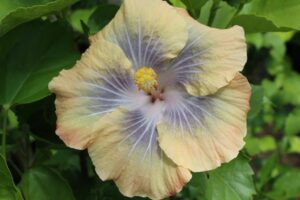 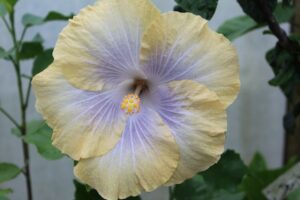 This is subtle and restrained, especially once the colours fade on the 2nd and 3rd days. My older daughter Marian was staying with me, took one look at the new flower when I excitedly told her about it, and said “Grapricot”. The colours are fully there on its first morning, so I thought that was a great name. Its Moorea Eccentric Blue x Silver Memory. 11.2010/ ff. 03.01.14.