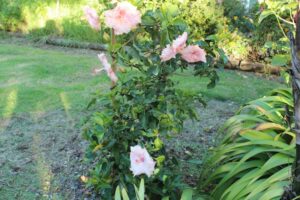 In 2008 I began importing seeds of hibiscus crosses done by collectors and experimenters overseas. As these grow up to a certain size, they begin to flower for the first time. I give them tentative names, and if they continue to do well in trials over the period of a year or two, then I will propagate them for sale. They have to show me that they will survive my climate outside on their own roots, and that they produce worthwhile flowers in good numbers. I will then graft the most promising onto rootstocks made from plants that are known to be vigorous in NZ. Then I can offer the resulting plants for sale with confidence. With several breeders I am developing a longer term relationship when I find them good to deal with, and whose flowers range from good to wonderful. 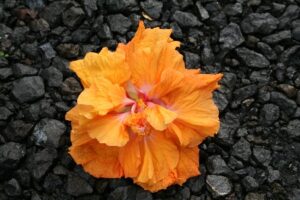 For example, here’s one of them that I am calling ‘Louis XIV’ after the Sun King. I will use this page to introduce new flowers to you as I continue with this program. I welcome any feedback on these images. By the way, do click on the thumbnail images, and they’ll pop up in a better size for viewing. 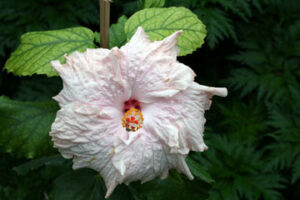 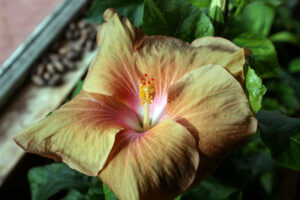 By Spring of 2008 another six seedlings had bloomed. Here are two of them. They are “Blue Blush” and “Dusky Maiden” Even in early 2012 I can say it’ll be quite some time before ones like this are available from my nursery.

I have also brought in seeds from cutting edge breeders in Tahiti. I thought that some of these were not going to be too happy with our winters, and I would have losses. Here is the first Tahitian-sourced hibiscus seedling to flower for me. I hoped it would keep up the good work, but it has been a struggle. 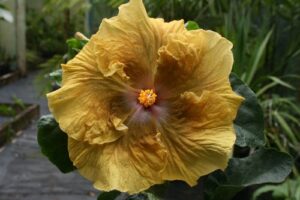 Here are some more from mid 2009. First up is the gorgeous ‘Louis XIV’ again. Then…well, there was a gap in which a number of new hybrids bloomed, but I didn’t update for some time. 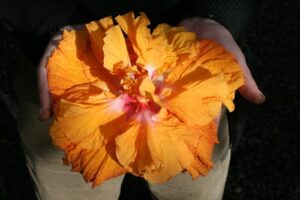 The little flower, a hibiscus miniature, is placed amidst the complementary colours of some Buddleia crispa leaves. Others (amongst the many new ones we liked) were Gingerbread Man. Right at the end of 2010 ‘Mona S’ bloomed for the first time. This added something very different to other recent ones.

In early 2011 I had lots of first blooms, and the numbers have climbed rapidly. In April Rosemary, having commented on this bloom a number of times, came up with an apt name for the one below. It reminded me of an impressionist painting, and I couldn’t locate which one was in the back of my mind. “Rosemary’s Favorite” was her suggestion, so here it is! 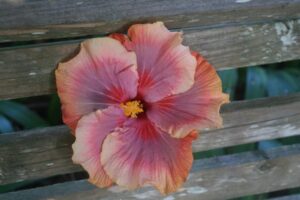 Nestlebrae North: the story so far. For discussion of what has been happening with new flowers since I moved north in late 2011, go to the companion page to this one…”New Flowers 2012 Onwards”