I’ve left below the explanatory stuff that I used on the website before I moved in late 2011. It tells you something of what I was doing before coming north. Here I’m looking a bit quizzically at a then new iMac and wondering what sort of photos this beautiful looking machine can take from an inbuilt camera of a not-so-beautiful guy who wants to plant a whole new property. 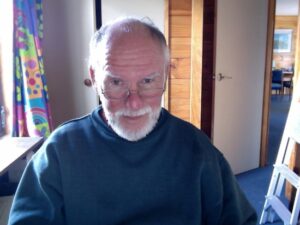 Somewhere out the window to the left (in this photo) there was a whole lot of painful planting to be done (my back was strained!), and hundreds of plants, and also the potential, new to me, of using an area under plastic for subtropicals. Well, a large area, anyway. 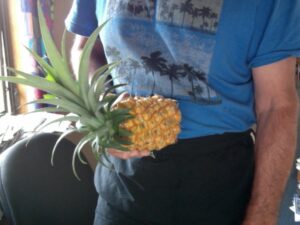 If you read my original description below, you can see that I was gathering photos and information for doing something on Nikau. That never reached fruition, though I still have the files, and I certainly had good intentions at the time. Since I have been in Northland, from October 2011 my energies, apart from developing this property and keeping it going by myself, have mostly gone into experimenting with, and now selling, new hibiscus that originated in seeds. I have been importing for quite a few years from good breeders overseas whom I trust. In fact, the photo that could go in next below this paragraph you are reading is that of the plant that I’ve named after myself. To see the hibiscus ‘John Prince’, go to the “Welcome” page at the start of this website, and scroll down just a little way.

John Prince
John’s professional life had nothing directly to do with plants. After doing an MA in history at Auckland

University he headed to Cleveland, Ohio, to study for a doctorate in Political Science in the late 1960s. Having obtained a second Masters degree there at Case Western Reserve University, in 1970 he returned to Auckland to teach in the Political Studies Department. He eventually completed a doctorate at Auckland, rather than at CWRU, and spent the following decades mostly involved with US politics. During a low key career at Auckland two of the better things that he did were to begin, in 1990, teaching the first course in NZ dedicated to Green Politics, and, in 1999, taking an early retirement option!

In 1980 John began his long membership of the NZ Tree Crops Association. He held positions as secretary, and then chairman, of the Auckland branch during the 1980s, and joined every possible rare fruit organisation in the world of that time. A decade later his love of palms began to stir and he was attending every meeting of the Palm and Cycad Society of New Zealand by about 1992. In recent years he has edited the quarterly journal of this society, and written extensively for it. He is currently gathering material for a book on NZ’s only native palm, the Nikau. Now hibiscus flowers have caught his attention, to add to the ongoing love of palms and exotic fruit. 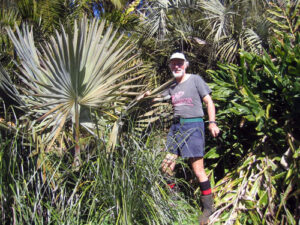