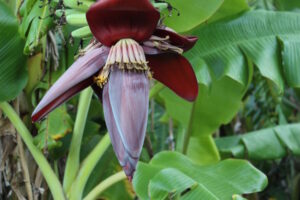 Here’s a fairly typical stem in flower on one of my recommended edible varieties. No irrigation, and minimal fertilization, but still quite acceptable.
Banana Plants for Sale [Note well: do read the explanations just below this!]
And also note that you can click on the thumbnail pictures to make them larger.

Musa species and varieties: Bananas
In early 2008 there were about 60 different sorts to view at Nestlebrae South. I could propagate just about any of them to your order. Many of the varieties, especially the ones producing for our weekend market stalls, were represented by more than one clump. The ones that I tried to keep in stock were the most interesting, or the most ornamental, or the best fruiting ones for NZ based on our experience. I no longer have access to that banana collection.

From early 2014 I was able to able to offer bananas for sale again, but it is from a very limited selection as compared with earlier times. The numbers available are very small, but I will try to help, depending entirely on the growth habits of the individual bananas. The small ornamentals are known, but the labels on the various edibles suffered an unfortunate fate between 2011 and 2014, and I mostly can’t identify which is which now. All I can say is that the plants are separated from each other, and distinct. If they are edible, then I stress that I only brought the better eating ones here to this property. If you buy plants from me I can promise that they have been well tested by my family, and by customers, over many, many years. It’s just that I can’t name most of them!

Sizes, and getting your banana plants
Mostly I don’t have plants in plastic bags and potting mix ready for sale. Often, depending on the season and the growth of the individual clumps, I can supply suckers with a small amount of root growth for you to plant and grow for yourself. (Guidance on how to do it is available- just ask me.)

OR, I will grow you new plants in the warm months if suckers are available for me to use. I have a smaller property, and often only one clump of a particular banana

In any case, full size bananas in PB40s become very large and then are too expensive to try shipping them via a courier. It’s rooted suckers when available at the same cost as bagged plants. It follows that good move would often be for you to commission me to produce one or more for you in the warm months.

Please enquire further — you can email me by clicking here.

How long till they fruit?
They should fruit in about three years from being a small sucker. Sometimes, if well looked after, with plenty of water, fertilizer and/or mulch, they can be quicker than 3 years. 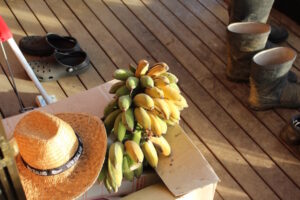 Can you cook with them?
Yes you can, and many are excellent. BUT … do experiment first with a couple of fruit. Some varieties which are fine to eat when ripe do not cook well, remaining starchy and unappetising. So, the watchword is to experiment. 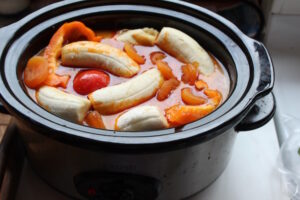 Ornamental bananas, some relatively new
I also have several ornamentals grown by a friend who has done some importing of seeds. I have put two of them right at the end of this list below. And I also have a small collection of purely ornamental plants with colourful upright flowers and/or foliage.

Why can’t you eat bananas from the purely ornamental species and variants? Answer: because they are full of seeds. [Click on the thumbnail just above this line.] 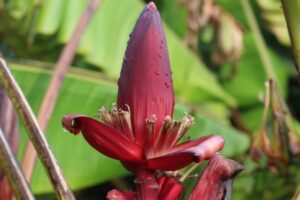 Slender stems to 3m, and leaves heavily marked with irregular claret blotches. Very ornamental. Colour disappears during our cool winters and returns with increasing warmth from mid-spring onwards. The photos shows colours have fully returned by the start of December. The leaf backs are a wonderful solid burgundy. The dramatic patterning is all on the leaf fronts. I did not bring this desirable ornamental north with me in 2011. In May 2017 I was back at my old property, and I brought back up north several suckers from the original plant that I once owned. (click on the left hand thumbnail). I’ve planted one, and will have plants available again in a year or two. In November 2019 I took the other photo, on my present property, and transplanted as a sucker from the old place. Note that this is a full size banana plant, not a dwarf. It is not grown for fruit, and is used by banana enthusiasts in southern England to give them a desired garden look in their warmer months, and is often then moved under shelter for winter. Ornamental species from Indochina, grown for its gorgeously vibrant, bright scarlet inflorescence. If the flower stalk is cut, then it will last at least three weeks in a vase with water. As good as any Heliconia, especially any Heliconia outdoors in Aotearoa. It’s a dwarf, growing up to about 2m+ outdoors, so it’s easy to tuck in amongst other plants. Very beautiful red stems and leaf center ribs make it full of ornamental potential. But, it’s heat demanding. NZ seems too cool for it to fruit well, or to grow really vigorously outdoors, but again it’s performed in a suntrap in Thames (and maybe elsewhere?). I am now trying it outdoors again here in the Far North. The bananas are small, even from under plastic, somewhat darker in flesh colour, and with a different flavour that is typical of the Indian subcontinental types that I’ve grown before. The fruit go yellow on the skin as they mature, but some red was left on mine. Below: young and perfect- before the northern Aotearoan weather gets to it. 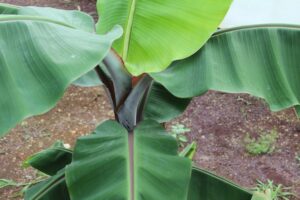 It’s unclear what the origin of this name is — it’s a ‘Silk’ banana type, and quite possibly ‘Apple’ under another name, with similar virtues and vices. That is, thin skin (which may split near ripening); a bit more mild astringency if not fully ripe than some other cultivars; and different texture- an attractive fruit with nice flavour, and not just a repetition of most other common cultivars in NZ. Worth having for variety if you already have Australian Lady Finger types. This is an old photo, but it looks like it could be an Apple/Hamoa bunch with several of the skins split a little bit along the length of several fruit.

Given to me by an acquaintance as the Samoan variety called ‘Paka’, this provides medium bunches with nice tasting fruit. It’s one of the ones whose fruit we sold readily at weekend markets.

The most common variety in Thailand, and popular in northern India and Malaysia. Does well in NZ, and, despite its origins, has a bit more vigour under cool conditions than most good edible bananas.

I’m not sure of the true name of this variety, but we were given it as ‘Samoan Large’. It’s different to anything else that we had at Nestlebrae South. Whichever cultivar it actually is, there is no doubt that it performs well for me. It’s vigorous as a plant, the bunches are not huge, but are fairly good, and the bananas are quite fat by NZ standards, and they eat well. A small species (to 2m) from Assam and northeast India. Yellow flowers on an erect pink-red inflorescence. Stems are red-black, and the leaves can show a burgundy-pink underside sheen. A really good subtropical ornamental for the warm garden. Keep individual stems down in number, take off the old brown leaves, and enjoy not just the flowers but also the individual stem colours. Bluish leaf tones, with a burgundy sheen at times, and powdery white on new leaf stems. A very beautiful pale violet flower. Keep stems down in number to better display the flowers. The latter can be a bit sparse and hidden. Definitely worth displaying them well so they get the admiration that they deserve. A dwarf ornamental banana, now sometimes seen in subtropical NZ gardens, (much more than any of the other, rare, ornamentals on this list). With striking pinkish flowers and fruit, it was the first purely ornamental banana to catch on with a few subtropical landscapers in the 1990s. Clumps rise up to 2 to 2.5m tall. This one has a really quite robust flower, stronger than most M. mannii flowers, which it otherwise slightly resembles. Come to think of it, ‘Mike Tyson’ mightn’t be a bad name for it! The new leaves show interesting patterning on the underneath, although this seems to fade with time. This one is like a rather delicate version of M. violacea crossed with M. velutina, with plenty of stems and flowers so far. In the well populated group of M. ornata variants or hybrids. The performance for me has been very good. Stems are multiple, and often stand clear of the other foliage and stems, so that they display well. I got this from Clinton Care, who grew it from seed he imported. So, I’m calling it ‘Clinton Care’s Pink’ See this interesting close banana relative in the “Ornamentals” section. 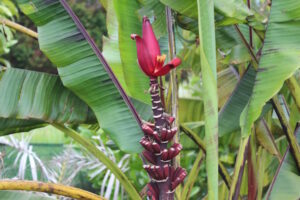